A Brief Brief History of Time

Ok, here's a big project if ever there was one.

Stephen Hawkings wrote this book called "A Brief History of Time", and it sold a metric shitload of copies. But, the thing is, the book is not the best popular science book I've ever read. In fact, it's not even in the top 20. But it does contain some interesting ideas about the Universe, and it's always useful to be able to bluff about books like this one. It makes you look (a) very clever and (b) able to get rid of losers who try to chat you up at parties.

A Brief Brief History of Time

(A commentary containing the sense of Hawking’s book without the lame science asshattery, but with much more l33t. This is not intended as a serious study aid, more as an aid to bluffing the book at parties. Although if you’re talking about this shit at parties you need to hang out with people other than Star Trek nerds. Also, this is something I'm doing purely for fun. I intend no disrespect, slander or infringement to any persons mentioned.)

--personally, I think this sounds like Eddie Izzard is telling this story.--

Chapter 1: Our Picture of the Universe

(Should really have been called “Well that about wraps it up for God.”)

The Universe: is very mysterious

Slightly Less Prehistoric Mankind: OMG! Lights in the sky! WTF is up with that?

Even Less Prehistoric Mankind: Well, all of this is here for us, obv. We are, after all, the sharpest tools in this particular box.

Aristotle: Ok, I’ve had a think. I’m kind of sure the Universe looks like this, and I’m the smartest bitch alive, h0rs. 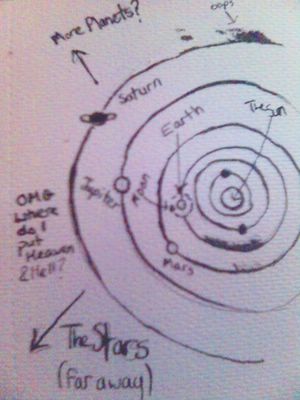 Aristotle: Look! The planets are all fixed to nested crystal balls! Isn’t it pretty! And the stars are attached to the outside shell! Lookit!

Ptolemy: I totally agree with Aristotle.

The Christian Church: In fact, we agree with Aristotle too. His Universe has plenty of places for Hell and stuff, and fits nicely with out scripture.

OVER A THOUSAND YEARS PASS. NO BUGGER THINKS TO QUESTION THE CHRISTIAN CHURCH ABOUT THE UNIVERSE ON ACCOUNT OF BLACK DEATH, DEATH FOR HERETICS AND LACK OF OILY FISH IN THE DIET.

Nicolas Copernicus (Copper Knickers to you and me): Haaaaang on a minute. I think that the maths for working out eclipses and such like would be simpler if we put the Sun in the middle. 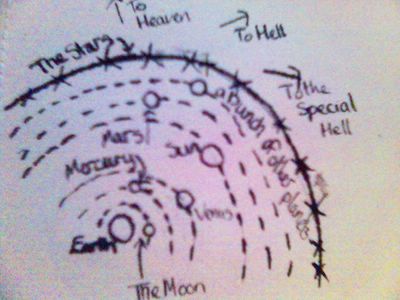 Copper Knickers: thinks Hmmm, maybe the world really is like that. I wonder…Still, I’d best keep it to myself, The Church are going to be pissed off when they see this.

Kepler: diligently analyses a tonne of astronomical data Fuck me sideways! It looks like old Copper Knickers was on the right track. But…the paths aren’t quite circular. They look like ellipses. Wow.

Kepler: thinks a bit The Church are going to be pissed off when they see this.

The Church: STFU Galileo! Do you really want to be the principle ingredient in a philosopher kebab?

The Church: Shh! We are right about everything, mmmkay? Invent cat flaps or tippex or something useful or shut it, right?

Galileo: But nevertheless, it moves…

Newton: bitchslaps Liebniz STFU n00b! I am a rampant egomaniac and therefore whatever I say goes.

Newton: bitchslaps Bob Hooke, just to keep him down Anyway. Now my godlike genius has invented gravity it looks like Galileo and those other chaps were right.

The Universe: OMG, you lot took your time.

Newton: Haaaaaang on a minute. If I’ve got gravity holding shit together, I don’t need Aristotle’s crystal balls. This means that the stars might be, like, really far away. And, like, go on for ever.

Newton: But, right, if they go on forever, then my shiny gravity means that the Universe will collapse under its own weight.

Newton’s flatmate: Seriously, Isaac, no more opium on your cornflakes.

Olbers: is a philosopher has a paradox Haaaaaang on a minute. I’ve just disproved the infinite static Universe hypothesis.

Olbers: Well. If the Universe is infinite, then every where you look in the night sky should contain a star. So, if the Universe is like that, it shouldn’t ever go dark at night. But it does.

Olber’s flatmate: Riiiight. But what about if there’s dust or some shit in the way and it blocks the stars out?

Olbers: I’d thought about that, k? The stuff in front of the stars would get so hot that it’d glow as bright as the star anyway.

Olbers: But because that’s not happened yet, it must mean that the stars weren’t always shining.

Olbers: I think I could do with a cup of tea after that. My brain hurts.

THIS IS ALL VERY WELL, BUT SOME EVIDENCE WOULD BE NICE, INSTEAD OF ALL THIS BLOODY PHILOSOPHISING. CONVENIENTLY, SOME DUDE CALLED EDWIN HUBBLE IN 1929 IS LOOKING AT FAR AWAY GALAXIES.

Hubble: Fuck me! Pretty much all the other galaxies are running away from us like we’re a stinky kid in a playground. I wonder if it was something we said…

Hubble: Buuut, if they’re all rushing away from us, then surely they were all in one place at one time.

Crikey, I bet it was quite warm and squashed having all those galaxies in the same place. Hot and dense, like a box of FHM models. Mmmmmm, FHM models…

Mrs Hubble: twats Hubble one with her handbag Stop thinking about FHM models and get back to your astrophysics.

ANYWAY, THE POINT IS THAT THE ETERNAL QUESTION OF WHERE THE UNIVERSE CAME FROM HAD BECOME A MATTER FOR SCIENCE AND REASON, RATHER THAN METAPHYSICS AND CONJECTURE.

Recent Mankind: still yearn for full knowledge of the Universe

The Universe: is just, really, complicated Come and have a go if you think you’re hard enough!

Recent Mankind: invent scientists and nerds to try and figure it out

Nerds: invent increasingly better science until they get to quantum mechanics and general relativity, which are both lovely on their own terms, but do not play well with others

Nerds: Oh bugger. Will true understanding ever be ours?

The Universe: thumbs nose at nerds

Nerds: Quit being so cocky, we’ll get you in the end.

Clickee ye here for the next instalment of "A Brief Brief History of Time...."
Brief history of time

I have been meaning to do this for a while...Actually I asked Matty to make a link in gimp for this website to go on my blog. Still waiting :P Now, usually, I don't have much of anything in common with my husbands