Tonight, I was reading one of my favorite sites and I came upon information regarding Asdzaa Nadleehe. Upon reading this information, I of course wanted to research more. So I have been doing just that. However in the midst of researching I came across another site that captured my attention.

However do to the time and the fact that my entire family is in serious grump mode I cannot blog in the depth that which I was going to. Most pertaining to my own thoughts on my night and observations.

At the moment I am so tired I can barely keep focused and concentrated.

I will leave you with some things that I found.

THE OLD WOMAN OF FAJADA BUTTE 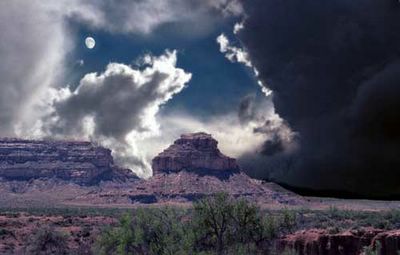 ADAPTED FROM:
A NAVAJO COUPLE'S INTERPRETATION OF FAJADA BUTTE

The canyons inside Chaco Cultural National Historical Park contain some medicinal and ceremonial plants. The canyon toward the eastern boundary was filled with naadaa [corn], naagezi [squash], and sunflower plants. Birds of different types would be chirping and flying around. Most of the medicinal plants are located on top of or near the base of the butte cliffside or canyon walls and as well where the plants with the highest ceremonial value --- called or referred to by users and various local or indigenous cultures either as the sister of ololiuhqui, the name for the seeds of the Rivea corybosa plant and means 'round thing', or sometimes toloache (from the Aztec toloatizn), usually referring to D. inoxia, but sometimes D. stramonium, most often the Datura species referred to as jimson weed, or D. metaloides usually applied specifically to the term used to blanket them all, Sacred Datura --- are found. Regardless of the name, the primary medicinal plant is mostly emblematic of the spritual deity or Yei known as Changing Woman (Asdzaa Nadleehe, the woman who is transformed time and again) who can take the form of a maiden, a mature woman, or a crone (like the three phases of the moon, waxing, full, and waning).

When I was a boy, I would be sent down into the canyons to pick the medicinal plants. The National Park Service has ordered that the local Navajos can't pick the medicinal and ceremonial plants that are within the park boundary. If a person says that the plants are not to be gathered and taken out of the park and it is also documented, then we can't gather and take the plants out of the park. If a person should give us permission to gather the plants, then it should be documented so that the Navajos should be allowed to pick the plants. These were the medicines used among the elder people for sickness and other ailments. Nowadays, younger Navajos are not interested in the ceremonial ways, so they don't know of the plants. [1]

NOTE: Fajada Butte, home of the Sun Dagger, in its own way has its own special sort of power that is said to be spirit related, but also thought by some to possibly be strengthened by a phenomenom called Vortexes. The butte creates an environment that grows a variety of plants traditionally used by the indigenous population for spiritual and ruitual purposes, plants that are not generally found on the surrounding plain. Special plants also grow on the mounds of the ruins of the ancient Native American astronomers that once inhabited the area. Although some feel the plants are equally powerful wherever they grow, the power of the plants is said to be increased by being on the butte.
Bryan C. Bates Archaeologist

Legend from the Pacific Northwest 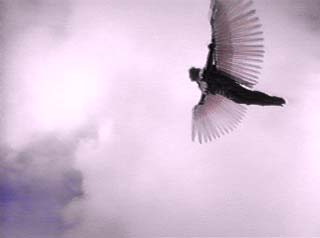 Thunderbirds are one of the few cross-cultural elements of Native North American mythology. Stories of Thunderbirds are found among the Plains Indians, as well as among Pacific Northwest, the Illini, Ojibwa, and Northeastern Tribes. Thunderbird mythology is found among the Early European Tribes also, but readily apparent traces are masked by later cultures. The Quileute, sometimes spelled Quillayute, is the name of a Native American tribe living along the Quillayute River in the Pacific northwestern state of Washington on the Olympic Peninsula. The following is their version of the Thunderbird legend from stories adapted from Indian Legends of the Pacific Northwest by Ella E. Clark, University of California Press, 1958:

Long ago, there was a sad time in the land of the Quillayute. For days and days, great storms blew. Rain and hail and then sleet and snow came down upon the land. The hailstones were so large that many of the people were killed. The other Quillayute were driven from their coast villages to the great prairie, which was the highest part of their land.

There the people grew thin and weak from hunger. The hailstones had beaten down the ferns, the camas, and the berries. Ice locked the rivers so the men could not fish. Storms rocked the ocean so the fishermen could not go out in their canoes for deep-sea fishing. Soon, the people had eaten all the grass and roots on the prairie; there was no food left. As children died without food, even the strongest and bravest of their fathers could do nothing. They called upon the Great Spirit for help, but no help came.

At last the Great Chief of the Quillayute called a meeting of his people. He was old and wise. "Take comfort, my people," the Chief said. "We will call again upon the Great Spirit for help. If no help comes, then we will know it is His will that we die. If it is not His will that we live, then we will die bravely, as brave Quillayute have always died. Let us talk with the Great Spirit."

So the weak and hungry people sat in silence while the Chief talked with the Great Spirit, who had looked kindly upon the Quillayute for hundreds of years.

When his prayer had ended, the Chief turned again to his people. "Now we will wait for the will of the One who is wise and all-powerful."

The people waited. No one spoke. There was nothing but silence and darkness. Suddenly, there came a great noise, and flashes of lightning cut the darkness. A deep whirring sound, like giant wings beating, came from the place of the setting sun. All of the people turned to gaze toward the sky above the ocean as a huge, bird-shaped creature flew toward them.

This bird was larger than any they had ever seen. Its wings, from tip to tip, were twice as long as a war canoe. It had a huge, curving beak, and its eyes glowed like fire. The people saw that its great claws held a living, giant whale.

In silence, they watched while Thunderbird - for so the bird was named by everyone -carefully lowered the whale to the ground before them. Thunderbird then flew high in the sky, and went back to the thunder and lightning it had come from. Perhaps it flew back to its perch in the hunting grounds of the Great Spirit.

Thunderbird and Whale saved the Quillayute from dying. The people knew that the Great Spirit had heard their prayer. Even today they never forget that visit from Thunderbird, never forget that it ended long days of hunger and death. For on the prairie near their village are big, round stones that the grandfathers say are the hardened hailstones of that storm long ago.

Thunderbird is a very large bird, with feathers as long as a canoe paddle. When he flaps his wings, he makes thunder and the great winds. When he opens and shuts his eyes, he makes lightning. In stormy weather, he flies through the skies, flapping his wings and opening and closing his eyes.

Thunderbird's home is a cave in the Olympic Mountains, and he wants no one to come near it. If hunters get close enough so he can smell them, he makes thunder noise, and he rolls ice out of his cave. The ice rolls down the mountainside, and when it reaches a rocky place, it breaks into many pieces. The pieces rattle as they roll farther down into the valley.

All the hunters are so afraid of Thunderbird and his noise and rolling ice that they never stay long near his home. No one ever sleeps near his cave.

Thunderbird keeps his food in a dark hole at the edge of a big field of ice and snow. His food is the whale. Thunderbird flies out of the ocean, catches a whale and hurries back to the mountains to eat it. One time Whale fought Thunderbird so hard that during the battle, trees were torn up by their roots. To this day there are no trees in Beaver Prairie because of the fight Whale and Thunderbird had that day.

At the time of the Great Flood, Thunderbird fought a long, long battle with Killer Whale. He would catch Killer Whale in his claws and start with him to the cave in the mountains. Killer Whale would escape and return to the water. Thunderbird would catch him again, all the time flashing lightning from his eyes and flapping his wings to create thunder. Mountains were shaken by the noise, and trees were uprooted in their struggle.

That is why Killer Whales live in the deep oceans today. That is why there are many prairies in the midst of the forests on the Olympic Peninsula.

It is worth noting that in Yurok myth Earthquake and Thunder are strongly associated. In "Myths and Legends of the Pacific Northwest", Judson (1916, p. v) speaks of "Tatoosh the Thunder Bird who ... shook the mountains with the flapping of his wings". Yurok areas are located at the north and South ends of Cascadia, where earthquake activity is more frequent than on the Washington and Oregon coastal region of the Quillayute.Wanderling's Journey

A post to say simply that I love my husband.