If you're a reader of my blog than you will know that this post came from my picture blog titled Brigitte. This particular post has a reason for being re-posted here. As you read it to the end, you will see that another post follows in regards to my questions about the Elephant and it's Tusks. Enjoy the information.
And let us show respect to these great creatures who have much to teach us two leggeds... 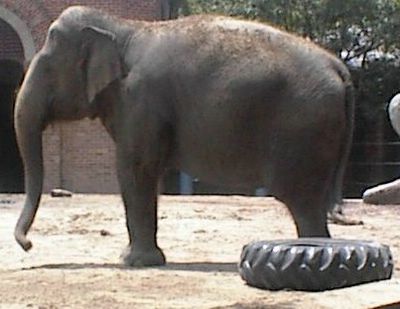 I watched this Asian/Indian Elephant for quite some time. The first thing I wondered was where were his/her and it's Mothers tusks. I was sad while contemplating this.

I thought to myself, perhaps I was wrong and they simply don't have tusks? Then Matty took his/her picture and it let out this sound that I had never heard before from an Elephant. It sounded like the deepest Thumder rolling through the sky's. Matty then thought that perhaps it did not like it's picture being taken. It was only a baby. I realised this because when it rolled with Thunder it's Mother came out to protect it and it in turn grabed onto her leg with it's trunk. After she Knew that everything was alright, she went back inside. The baby Elephant then came over and stood by the edge of this, this landing here where you see it's toy tire. I knew it wanted to go inside with it's Mother but I also sensed that it was sad to go in, it was asking for help. I noticed the huge Beach Ball sized ball that was very far out of it's reach. He/She stood there as close as he/she could get to the ball, just staring at it. I of course wanted to jump over the little fence and get the ball for it. But you know that I couldn't do that. So I looked at it and I said. "Do you want your ball?" At that it started shaking it's massive head up and down over and over. SO I asked again, "Do you want your ball?" It continued with the nodding of it's head. I felt so bad for the little baby. Well Big baby. I wanted to help it so much. As I watched it, I knew that I was correct, it was as if watching the signs and signals from my own children. He/She then realised I couldn't or wasn't going to get it it's ball so it picked up it's tire with it's trunk and went inside with it's Mommy. 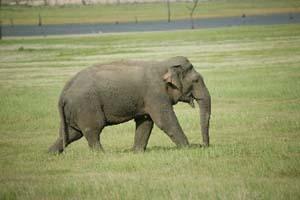 Monday, 18 July 2005
Asian elephant
Evolutionary pressure may lead to more Asian elephants in China born with a gene that leaves them tuskless, and so less desirable for poachers (Image: iStockphoto)
More male Asian elephants will be born without tusks because poaching of tusked elephants is reducing the gene pool, Chinese researchers say.

Their study, conducted in the southwest province of Yunnan where two-thirds of China's Asian elephants live, found the tuskless phenomenon is spreading, according to a report in the China Daily.

The tusk-free gene, which is found in between 2 and 5% percent of male Asian elephants, has increased to between 5 and 10% in elephants in China, says zoology researcher Associate Professor Zhang Li, from Beijing Normal University.

"This decrease in the number of elephants born with tusks shows the poaching pressure for ivory on the animal," says Zhang, whose team has been studying elephants since 1999 at a reserve in Xishuangbanna.

Only male elephants have tusks, which are said to be a symbol of masculinity and a weapon to fight for territory.

But due to poaching for ivory, the elephants' pride has become a death sentence, the report says.

"The larger tusks the male elephant has, the more likely it will be shot by poachers," says Zhang. "Therefore, the ones without tusks survive, preserving the tuskless gene in the species."

A similar decline in elephants with tusks has been seen in Uganda, which experienced heavy poaching in the 1970s and 1980s, the report says.

But Zhang's findings must be tested, say some academics.

"This is, of course, a possibility, but till now there is no clear genetic proof that it can occur," Vivek Menon, executive director of the Wildlife Trust of India, is quoted as saying. 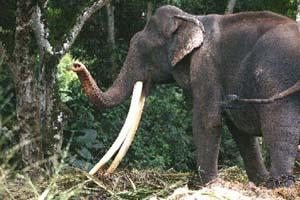 Rampant poaching of male elephants for tusks has also caused the female-to-male ratio to rise from the ideal 2:1 to 4:1 in China and 100:1 in India, the report says.

China is among 160 nations that signed an international treaty administered since 1989 banning the trade in ivory and products of other endangered animals.

In addition to poaching, human activity that causes a loss of habitat also threatens the animals.

Whew, well, I don't konw when I will be posting again. Perhaps in a few months. Matthew has been amazing thus far. I'm so lucky to be married to him. He is always extra good to me when I am in this position. He's

Awakening. Freedom. No Fear. Only Love. Thoughts of life, times past, times present, times to come. It's a good day to be alive. I always think. I am constantly going in a whirlwind of color. It has yet to cease. Since the day I