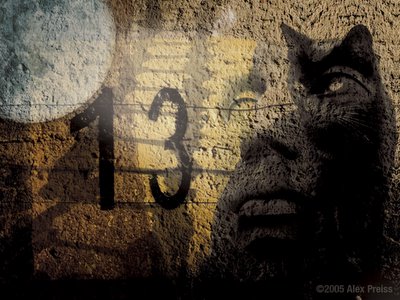 We are coming upon another Friday the 13th soon.

I had writen an old post about Friday the thirteenth quite some time ago.
So I'll repost the link here because I find it interesting to go back through old entries.

I'm not too superstitious right now, at the moment. Perhaps it's because I am emotionally drained as well as physically drained. After all Elish will soon be here.

I just went into google to try and find a nice picture that would correspond with this coming Friday the 13th, but no, there were only pictures of the horror movie. So instead I typed in Superstitions.

I know this isn't about Friday the 13th but I do like it and thought I would post it here.

The Irish have always believed in superstitions, and like their ancient counterparts in Britain and Europe, many of their beliefs are rooted in pagan rituals which precede the introduction of Christianity.

Long ago, it was a common fear among new mothers in Ireland that their infant might be a changeling - a fairy which has taken the shape of a human. Since this was apparently not a desirable situation, there were two tests which suspicious parents would carry out to make sure their child was human. Changelings were said to despise water, so the child's mother would carry the child while stepping over a river, believing that a changeling would reveal itself rather than be forced to get that close to water. It was also believed that changelings had an affinity for the bagpipes. Bagpipes would be placed near the Bagpipes bed, under the belief that no changeling could resist them for long and that if the child really was a changeling, he or she would soon give in and start playing them.

At one time, the Irish believed that the element of Iron had magical properties and was capable of bringing good luck. This reverence also extended to those who worked with it; it was also believed that blacksmiths possessed secret knowledge that they could use to cure illnesses and cast out evil spirits.

The Bean Sidhe (Banshee) There are also some less benign superstitions held by the Irish, one of which is that of the Bean Sidhe, commonly known as the Banshee. The wailing of these ghostly "women of the hills" was said to foretell death and the wailing of more than one banshee was believed to foretell the death of someone important.

Many of the ancient pagan religions considered objects in nature such as animals, rocks, and especially trees to be of much importance. Trees were believed to have magical abilities, specifically in the area of healing. Even human characteristics were attributed to trees; it was thought that they had memories and the ability to communicate with people under the right circumstances. So important were trees that there were a system of fines to be imposed on any who cut one down unnecessarily.

Even some of the rituals and superstitions that still exist today can trace their roots to Ireland of old. The practice of saying "touch wood" or "knock on wood" (often while performing said action) for good luck is a remnant of the pagan beliefs regarding trees. That will certainly bring new meaning to the expression the next time you hear it or say it yourself, won't it?

Does lack of snow indicate Mount Fuji's about to blow? Watch out, Mount Fuji, one of Japan's most endearing symbols, looks like it's about to blow its top, according to Shukan Post (1/13-20). Perhaps the biggest indication that Fuji-san's lid is loose comes

Tuatha dé Danann Originally uploaded by Von Stetina. When the fairy race of the Tuatha dé Danann arrived in Ireland, they came like a mist across the waters, bringing with them magical gifts. These were the lia fail – the coronation stone, the spear of