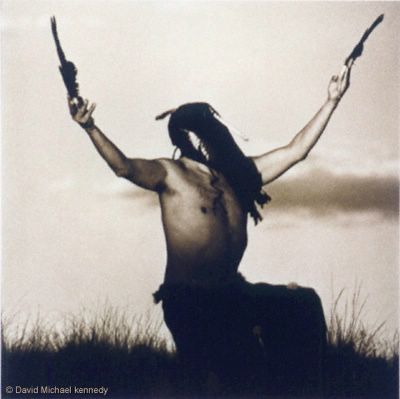 Whatever the heyoka does, will be done with the intent of bringing the absurd into the Tribe. Of shocking people into an awareness of the fine balance between extremes that creates the energy tension of life.

Heyoka may encounter Wakinyan a second time. In the second encounter, Wakinyan appears as the hugely exaggerated, archetype Heyoka. This encounter shocks the Heyoka into an awareness of the Truth, and the Heyoka is restored to "sanity".

After restoration, the person is blessed by the spirits with the true humility of Knowledge. A "sane" Heyoka is capable of almost any behavior. The boundaries and limits of social intercourse disappear." 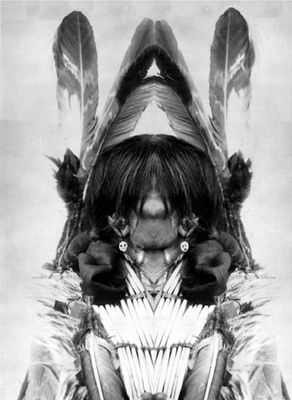 The Heyoka is a sacred fool, a clown with a great deal of power. The "contrary", the person who does everything backwards. They are yin and yang, sorrow and laughter, good and bad all rolled into one. They are one of the most important of the Medicine People in the Lakota Nation. Usually Heyokas are men but some women have Heyoka inside them and therefore must become a Heyoka.

The Heyoka's power comes from the Great Winged Ones, which the whites call Thunderbirds. They have control over the weather and certain sicknesses. They are "Thunder dreamers" and once you have a dream of thunder or lighting you become one of these contraries- whether you want to or not. 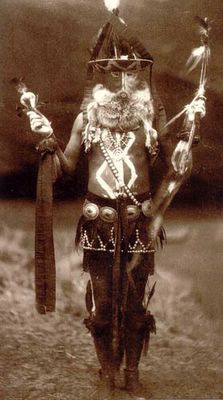 The Heyoka has strange and enormous powers even though they make everyone laugh with their backwards behavior. There is a great reverence and fear of the Heyokas as their contrary behavior is intimidating to most people and you never know what they are going to do next.The Heyoka's power is usually used for good but because they are Heyoka one never knows. 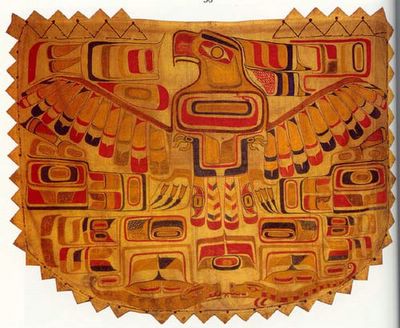 --Lame Deer--
" These Thunderbirds are part of the Great Spirit. Theirs is about the greatest power in the
whole universe. It is the power of the hot and the cold clashing above the clouds.
It is blue lightning from the sun. It is like atomic power. The thunder power protects
and destroys. It is good and bad; the great winged power. We draw the lightning as a
forked zigzag, because lightning branches out into a good and bad part... In our Indian
belief, the clown has a power which comes from the thunder beings, not from the
animals or the Earth. He has more power than the atom bomb, he could blow off the
dome of the Capitol. Being a clown gives you honor, but also shame. It brings you power,but you have to pay for it." 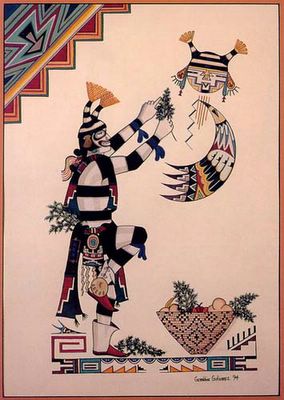 A Lakota way of being, a medicine way. A Heyoka is one who does things backwards or opposite. The idea that Heyoka is a clown comes from the opposite behavior; it is part of the medicine of Heyoka, to remind us we are merely human beings and not to become too serious about ourselves, not to imagine we are more powerful than we really are, reminding us that Spirit holds all the power. In this day there are those among the Lakota who pour Heyoka lodges, which are directed towards the West and full of laughter. If a Heyoka man messes up he has the Thunder Nation to deal with. Spirit chooses who is Heyoka; it is a very difficult path to follow. 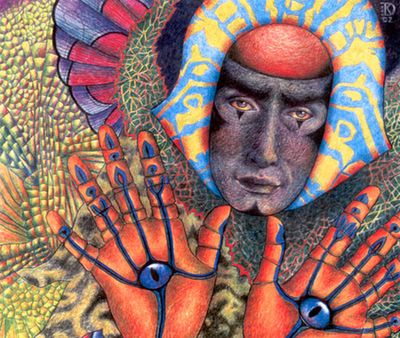 picture by: -Susan Seddon Boulet- Spider Woman, the weaver of life, great mother of the Hopi Indians. In Merlin Stone's version from Sia Pueblo, Spider Woman arose from nothingness at the time of the dark purple light before dawn. The goddess spun a silver