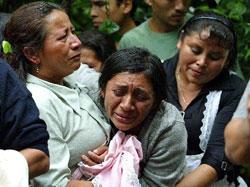 A grief-stricken mother is crying for her dead children at the funeral in El Salvador Oct. 6, 2005. The pounding rains in El Salvador have already claimed 65 lives over the past days and the number of people evacuated reached 54,308, according to the authorities.

MEXICO CITY, Oct. 7 (Xinhuanet) -- The number of people killed by relentless downpours due to Hurricane Stan in Central America and Mexico rose to 225.

The death toll, however, could continue to climb, said the authorities Friday.

The death toll in Guatemala surged to 126 after another 47 bodies were found in the rural area of Santiago Atitlan.

Meanwhile, the pounding rains in El Salvador have already claimed 65 lives over the past days and the number of people evacuated reached 54,308, according to the authorities.

The authorities confirmed that the death toll in Mexico rose to 18 as of Thursday and Stan also left at least two dead in Costa Rica, four in Honduras, including three children.

Hurricane Stan, ranking at category one, the lowest on the five-step Saffir-Simpson scale, also affected Cuba, where no victims have been reported yet.

This year's Atlantic hurricane season, which runs from June 1 to Nov. 30, has been one of the deadliest and most active on record.

Hurricane Katrina, which slashed the US Gulf Coast on Aug. 29, was one of the worst natural disasters in the country's history, killing at least 1,212 people, displacing millions of others and costing the country up to 200 billion US dollars. 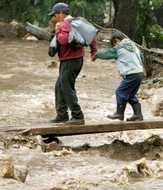 A Guatemalan man and his son cross a flooded road in Tecpan, Guatemala October 6, 2005. More than 200 people have now died in floods and mudslides in Central America and southern Mexico in the last few days in the wake of Hurricane Stan.

SOLOLA, Guatemala, Oct 7 (Reuters) - Rescuers fought through crumbling mountains and waterlogged plains on Friday to try to reach survivors of landslides and floods that have killed at least 218 people in Central America and Southern Mexico.

An elite emergency team worked through a night of fog and rain, amid multiple landslides, in their effort to get to the Maya Indian village of Santiago Atitlan, where 40 people died in one of hundreds of mudslides in the wake of Hurricane Stan.

However, the winding Pan-American highway that is Guatemala's lifeline to the rest of the world was impassable in parts. As one torrent of debris was cleared, more earth tumbled from sodden mountainsides, blocking the way.

"Whatever happens, we have to reach them," rescuer Jose Victor Chavez said, picking his way through rubble-strewn roads flanked by walls of soggy dirt 10 feet (three-metres) high.

The rescue team planned to make a fresh attempt on Friday morning to reach Santiago Atitlan, a tourist destination which sits on Lake Atitlan, a picturesque collapsed volcanic cone filled with turquoise water.

Stranded victims of the mudslides were desperate to reach their family members in the village.

"I've tried to call 20 times but there's no signal. I'm going with a heavy heart because my family's there," said Juan Mateo, 55, who walked for hours on Thursday night to reach Solola and hoped to get to Santiago Atitlan on Friday.

All along the highway to Solola, the region's biggest town, shellshocked villagers told Reuters reporters traveling with the rescuers of fresh landslides that swept away houses and lives.

Parts of Guatemala's jagged western highlands dissolved under this week's relentless rain, and vast tracts of the country's low-lying agricultural heartland on the Pacific coast turned into oceans of chocolate colored water.

Television footage showed Guatemalans sliding on ropes across a raging torrent from the smashed stump of a concrete bridge.

Reporting 200 landslides, Guatemala's civil protection agency said it had 124 confirmed deaths and that the toll would surely rise. There were at least 65 dead in El Salvador, 15 in Mexico, 10 in Nicaragua and four in Honduras.

Across Central America and southern Mexico, relentless rains have prevented troops from getting drinking water and medicine to remote villages. Although Hurricane Stan fizzled out after slamming into Mexico earlier this week, the rains are forecast to continue into the weekend.

The impoverished region is particularly vulnerable to rain because so many people live in precarious improvised dwellings dangerously close to river beds and on mountainsides.

Cut off by all other means, scores of stranded villagers called into Guatemalan radio stations on cell phones for help.

"There are a lot of people in the shelters but we have nothing to eat," Flor de Maria Perez told a station from the village of Chactela near the border with Mexico. "The children are crying and we don't have any electricity."

Around 2,500 homes have been destroyed in the bustling Mexican town of Tapachula, on the border with Guatemala.

Entire neighborhoods are flooded after a churning mass of raging muddy water tore Tapachula in two, sending houses and shops tumbling into the rapids.

The city's Coatan river, lined by poorly built shacks, was not much more than a stream before Stan struck.

"No one can hold back nature," said schoolteacher Jose Miguel Sanchez, shaking his head as he looked at a metal railway bridge that had been ripped apart and swept downriver. (Additional reporting by Herbert Hernandez in Guatemala and Noel Randewich in Tapachula, Mexico)

A Guatemalan woman cries outside a morgue where her relatives lie dead in Tecpan, Guatemala October 6, 2005. More than 200 people have now died in floods and mudslides in Central America and southern Mexico in the last few days in the wake of Hurricane Stan.

Hundreds of people were killed in South and Central Asia and many more injured when a magnitude 7.6 earthquake -- estimated to be the most intense in the region in the last century -- jolted cities in three countries early today. Officials in

New Testament -- Matthew 24: 4-21 And Jesus answered and said to them: See to it that no one misleads you. For many will come in my name, saying, "I am the Christ," and will mislead many. And you will behearing of