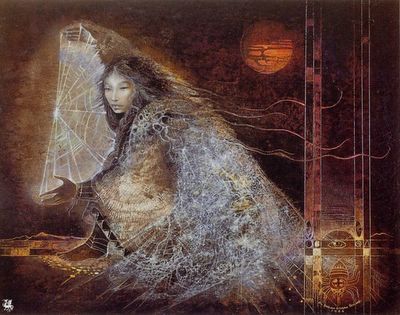 Spider Woman, the weaver of life, great mother of the Hopi Indians. In Merlin Stone's version from Sia Pueblo, Spider Woman arose from nothingness at the time of the dark purple light before dawn. The goddess spun a silver strand from her Spider's body and cast it out to connect the east and west of the horizon. Then she spun another strand from north to south. By doing this, Spider Woman created the four directions, with herself as the center: she created the Hopi Road of Life in the shape of the equal-armed cross. The great mother sang the Creation Song from her place at the center of the web of the universe, and her daughters Ut Set and Nau Ut Set were born from the sound. The twin goddesses made the sun and the moon from seashells and colored stones on earth, and put them into the sky in their places. They created the Star People to light the night way when the moon went too far to see. In Hopi anthropologist Frank Waters' version of Taos Pueblo, Spider Woman made twin sons called Poqanghoya and Palongawhoya, the north and south poles. They created harmony and balanced the earth, made it rotate safely and in tune. Spider Woman then created from the earth trees, bushes, plants and flowers, all kinds of seed-bearers and nut-bearers to clothe the earth, giving to each a life and a name. In the same manner she created all kinds of birds and animals -- molding them out of earth, covering them with her white-substance cape, and singing over them. She took the four colors of clay and made them into the four colors of people, red, yellow, black and white. She spun life from her body, wove it into a white cape of creative wisdom, and covered the four people with her magic. As they each awoke, they discovered that a thin strand of spider filament connected them to the goddess' body at the kopavi, the purple light chakra at the crowns of their heads. The mother instructed them to always keep this door open to her, to creation, spirituality and the life force.

The Hopi have a system of colors of light that match the colors of the steps of creation. These in turn match parts of the body, are a system of chakras and chakra colors very close to that of India and Tibet, and are used in psychic healing and the Craft in the West. The axis of the earth mirrors the spinal column of the body, and radiates out to these light :enters or chakras. Through the kopavi, the human spirit connects and speaks to Spider Woman and the universe.

Spider Woman sent the four people to live on the earth, to find joy and the Beauty Way, to populate the world. They emerged through the sipapu, the center of the earth and the womb. She taught women the secrets of weaving, how to spin wool and flax into yarn and weave the yarn into blankets and clothing. Ut Set gave the people corn, the milk of the mother's breasts, and Nau Ut Set showed them how to use the corn for food and for prayer. Spider Woman taught the Hopi of the Road of life gave them eagle feathers to protect them, and told them again of the kopavi, the door that kept open connects them to her wisdom. among Spider Woman's many names in the southwest United States .le Spider Grandmother, Hatai Wugti, Awritelin Tsita, Huruing Wuuti, Sussistanako (Thought Woman), Kokyangwuti, and Tsitsicinako.
---From The Women's Spirituality Book--- 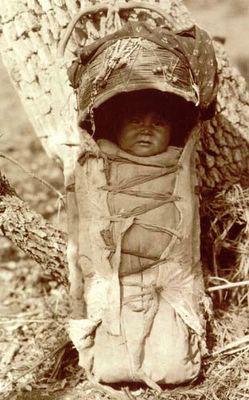 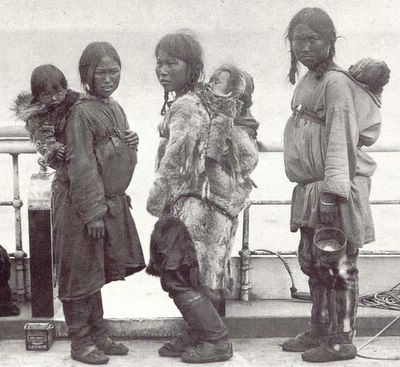 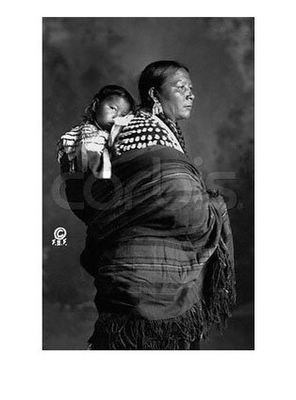 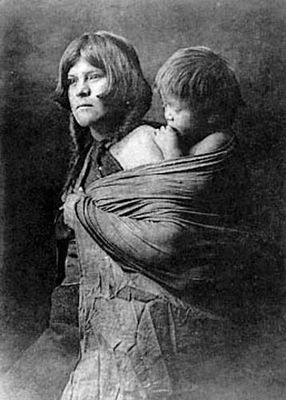 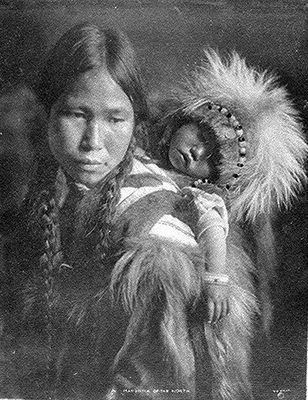