The following was written by Sidney Smith, owner of Haunted History Tours, Inc. of New Orleans - Mat's former employer and our host for shelter during Hurricane Katrina. 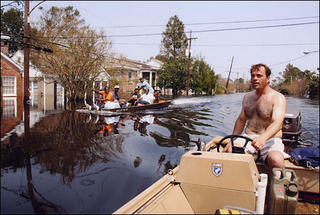 On Sunday the hurricane was coming and I'd taken several people into my home--my friend Adele, her 80 year-old mother, one of my tour guides, his wife, their two little children, and a couple of dogs and cats. My home is in Uptown on Fontainebleau Drive. It's relatively close to the Tulane University area.

Most of the city had evacuated. I was born in New Orleans, and I have been through numerous hurricanes. I just didn't think this one was going to be any different. The hurricane came on Sunday night and raged through the city. By Monday afternoon, it was pretty much over. We felt for the most part we'd dodged the bullet.

When I woke up on Tuesday morning, my street was a river, my front yard was a lake, and it was rising. So we started frantically moving things--important papers, my computer hard drive, things like that things--to the second story of my house. I didn't know that the levee had broken. By Tuesday night, the water was four to five deep in my house and we had all evacuated to the upstairs. Tucker Carlson's show called me up and said, "Well, what do you think now, Mr. Smith?" And I said, "I think I might have made a colossal mistake."

Shortly after that call we lost phone service and all communication with the world. All we had was a battery powered radio. By Wednesday, Adele had taken her spot up on the roof. She was doing roof duty, looking for boats passing down the street. Helicopters were flying overhead all the time, but nobody was rescuing us.

The area had become truly toxic. We had heard about corpses floating down the street. There were dead animals in the water. There was pesticide. There was gasoline. There was urine. There was feces. And the town was starting to burn. The fire department couldn't fight do anything because there was no water pressure. It felt like something out of a Mad Max movie or Escape from New York.

On Wednesday, we evacuated my tour guide, his wife, and their two young kids. They got into a boat passing down the street and were taken to points unknown. By Thursday, we had pretty much gone through our own water supply. I canoed to one of my neighbor's houses to break in and get food and water--I might say, with their permission. Then the military finally arrived and dropped us two boxes of MREs and a case of bottled water. It bounced off the roof and into the toxic soup, so I had to wade out into that mess to get it.

On Friday, Adele was airlifted off the roof by helicopter. After she left, it was just me and her 80-year-old mother, Lola. The mother couldn't make it to the roof but it was important someone be on the roof. There was no other way anyone would know you were there. Remember, by this time, I was one of the only people left in my neighborhood. Most of the city been evacuated.

On Saturday, maybe noon-ish, we were listening to the radio and I'm weighing my options on what to do next. I was in the process of making a sign, "Food and water needed" when I hear a whistling in my house. At first, I thought it was coming from the radio. I couldn't imagine anyone was in my house. But I started wandering around the house and I come face to face with this guy. About 40 years old. Bare-chested. Once it was established that he wasn't going to shoot me and I wasn't going to shoot him, he told me that he had heard about our plight on the internet. I said, "So you're here to rescue us?"

He says, "Yeah. You got a telephone?"

I looked at him and kind of laughed and said, "Sure. But I haven't had phone service in a week." And he says to me, "Gimme your telephone. I'll hook it up."

And I said, "What, are you from the phone company?"

So we walk downstairs to the front of my house. He climbs up on a fence, hooks the telephone to the house and, bingo I've got a signal.

I said, "What's your name?" He says, "The name is Gambino." Now in New Orleans, there's a bakery called Gambino Bakery. So I said to the guy, "Are you in the bakery family?" And he says, "No, I'm from the other family. I'm here to clear the family name." It was a real Seinfeld moment.

So I called a few people. I'm still weighing my options at this point. Whether I should leave or stay with my house and just send Adele's mother with Gambino. Because that was the main reason we couldn't all be airlifted, we had the old lady with us. After a little thinking, I decided this would be the best time for me to evacuate. I wasn't so worried about starving to death. But when I started seeing the fires in my neighborhood, I started worrying. I saw an entire shopping center burn down and there was gasoline all throughout the water.

So we all sailed off in Gambino's boat--me, Gambino and Adele's mother, Lola. We sailed up Nashville Avenue to Claiborne Avenue to Napoleon Avenue to St. Charles Avenue. It was totally surreal. We sailed over houses, stop signs, totally submerged vehicles, dead animals, what looked like corpses, army vehicles. It was like nothing I'd seen in my entire life.

Once we got to St. Charles, Gambino carried Lola to the dry land. The street corner was flooded with military and police with shotguns. So we get into a police van. There must have been 20 of us. I was crammed in with my knees up to my chest. It was very uncomfortable. The van made its way through the city to New Orleans airport. There were thousands of people massing around the airport. I saw dead bodies piled on top of each other, I saw sick people, dying people, children without parents. Nobody knew what they what they were doing or where they were going.

I asked one of the military guys, "Where is everybody going?" The guy says all the flights are going to San Antonio. So I grabbed Lola, and we stood in line waiting for a flight. I thought we were going on a commercial airline to San Antonio but when we got outside, I saw the largest cargo airplane I've ever seen in my life. It looked like a warehouse with wings. There must have been five or six hundred of us in there. There were no seats, no windows. We were all sitting on the floor. I felt like one of the Jews going to Auschwitz.

On the plane, it was hot and noisy. Midway through the ride, a voice comes on the speaker, "Ladies and gentlemen, we're not heading to San Antonio. We're heading to Fort Smith, Arkansas." A near-riot develops on the plane. We get to Fort Smith and there were two rows of military guys waiting for us, shaking hands, clapping. I felt like one of the Iranian hostages that had just come back to America. We were taken straight to Fort Chaffe, where we were processed. When I walked into the processing building, I saw this young girl--twenty something with tears in her eyes, just looking lost. I asked if she was okay. She said she got separated from her fiance at the New Orleans airport. So I took her in. Me, her and Lola, we became a family and went to the barracks together. 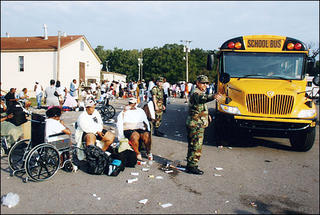 The next morning, I went looking for breakfast and found that the place had become a city. It was an unbelievable sight. The place was jam packed. Kids without parents. Parents without kids. The elderly. The infirm. I thought, "This is a riot waiting to happen. This is a powder keg." So I started asking military guys, "Now that we're here, how do we get out?" Nobody could answer the question. Nobody knew how to get out of there. They only knew that people were coming in, bus after bus. Long story short, it wasn't the military that got us out, it was civilians. I said, "Take me to the nearest airport."

A couple hours went by, and the three of us--Lola, Lindsey and myself--get into a van with some volunteers who drove us to the airport at Fort Smith, where we bought airplane tickets. Lindsey flew to her family in West Virginia and Lola and I flew to Fort Lauderdale.

October the 3rd was a new moon solar eclipse. At this time I received some very powerful messages through dream time. I also decided on October the 4th to look at Crystalinks website, something I have not been able to do often since Katrina.

Update: For those of you who were helping or wondering - Guinness was rescued (yesterday, I believe) by Kalila Smith, my supervisor for Haunted History Tours, Inc. Apparently there was enough food and water left behind that there was some left when the dogs