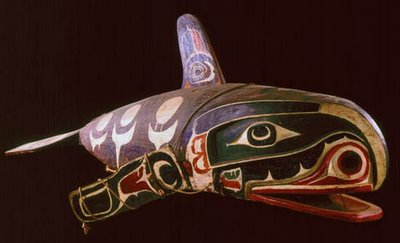 From The Great Eskimo Womans Prophecies:

I saw my brother the whale, when he came to me in a dream.

Comes the whale in winter, with the news of our Savior's coming.

Whales were regarded as a chiefly fish, and when stranded are seen as a gift from Tangaroa (the God of the Oceans). Whales were thought of as somewhat supernatural, they were seen as guardians during the long ocean voyages and were deemed to be tapu, or sacred.

"For millennia Whales and Dolphins have repeatedly woven themselves through creation myths and rituals of countless tribes. To various indigenous people therefore, Cetaceans are revered stewards speaking of our common destiny, of our interdependence as creatures of one great planet. Guided by this wisdom, tribal shaman still call on Whales and Dolphins to request guidance and healing." - "Eyes of the Soul" 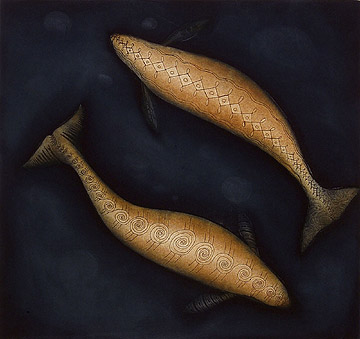 And here is something I posted to Back on April 30th 2005 which coincides with a bit of the article: "even sonar from ships can send whales astray into potentially dangerous waters."

The U.S. and other navies are developing and implementing new long-range active SONAR (SOund Navigation And Ranging) systems capable of generating extremely loud underwater sounds in response to the challenges they face from today's quieter submarines. One of them, the diesel-electric Russian Kilo Class shown on the right, has been sold to countries regarded as potential adversaries, and there is speculation that it could travel thousands of miles quietly and fully submerged if converted to use a fuel cell. Today's nuclear submarines are quieter than their predecessors as well.

Other loud SONARs are intended for use in scientific research programs, and seismic explorations are using explosive and other devices that produce loud sounds. These devices are also discussed.

Use of the Low Frequency Active SONAR System (LFAS) being tested by the U.S. Navy requires a National Marine Fisheries Service (NMFS) permit to "take" marine mammals, where take' is defined as "harass, injure or kill". Permission for the use of this SONAR in U.S. coastal waters has been granted by all of the appropriate states except California, where the Navy has reportedly given up' due to the strong resistance it has met. Similar SONAR systems are being used by the French and Russian Navies, and implemented by many NATO Navies. The use of loud SONARs by U.S. research organizations also requires an NMFS `take' permit.

The threat these devices pose to marine life is primarily due to the extremely loud sounds that they can produce---up to 2.7 billion times as loud as those that produce pain in humans and 8.8 trillion times as loud as those that cause permanent hearing loss in humans. It's known that sound at significantly lower levels can cause physiological harm to aquatic and amphibious life forms; the exact levels that are dangerous are not known. Sound is also known to cause short-term changes in the behavior of marine life forms at the relatively low sound level of 2,048 times less than that which causes human pain.

Many groups and individuals believe that these loud SONARs can and have caused harm---including death---to marine life, particularly mammals. There is strong actual and circumstantial evidence to support their claims: active SONARs used by the military have been directly linked to the strandings and deaths of marine mammals.

Further arguments against these SONARs can be made on the basis of their effectiveness for the tasks. Obviously, the organizations that are developing and installing them believe that they are effective, appropriate, and either harmless to marine life or sufficiently necessary to justify the ecological cost.

This page is intended to help you come to your own conclusions about these military and scientific devices.

"served in the U.S. Navy from October 28, 1965 until November 8, 1974, specializing in the field of Anti-Submarine Warfare (ASW) as an Acoustic Sensor Operator. Duty included five years with Patrol Squadron Twenty-Four (VP-24), at the time a front-line unit that made three deployments (totaling 14 months) to Keflavik, Iceland / Lajes, Azores. The Squadron was awarded both the Navy Unit Citation and Meritorius Unit Citation for its performance during one of those deployments, and I received a personal letter of commendation form the Chief of Naval Operations for his performance during that same deployment.

Subsequent to that duty, I served for three years as an instructor with Patrol Squadron Thirty (VP-30), the east coast training unit for Patrol Squadron personnel, and for one year of that duty, served as the Air Forces, U.S. Atlantic Fleet (AIRLANT) Naval Aviation Training and Operating Procedures Standardization (NATOPS) Team Evaluator for the Acoustic Sensor Positions in the Lockheed Orion P-3A, P-3B, P-3B (Deltic), and P-3C aircraft, representing three generations of airborne ASW acoustic technology. I have over 5,000 hours of flight time in Navy Patrol planes.

A history of VP-24, which was de-commissioned at the end of the Cold War, is available in" .pdf format at http://pages.prodigy.net/pruth/vp24.pdf

It is in my opinion that Humans intervened in the wrong way. I feel in my gut that they are making any excuse they can for this Whales death. Would you also not go into shock if some species different then your own who does not understand you on a seriously sacred level lifted you in the air and transported you into some strange vessel out of your environment ... yes thinking they were saving you... but not going about it properly. Scaring you, your heart racing, confused and scared. Perhaps you would die. My Aunt Betsy died in a situation similar.

No she was not a whale.

She was a mentally retarded and one day fell and cut her head open, or so they say she fell. Yet I will never know because in her scared state, as they were strapping her down so they could sew her head closed, she panicked and had a heart attack. Not unlike what I was reading about this great Sacred Whale.

I read the words written by humans, that he had this abrasion and that contusion. However, in the civilized non aboriginal world that these humans who tried to "save" this whale live in, they went about it wrong and I can't help but feel in my heart that the humans caused these scrapes, bruises, panic and fear that caused the GREAT WHALE to go into seizers and convulsions.

I am sad, and upset with my fellow humans failure.

The Mistress of animals, as she is sometimes referred to, is a fourth century stonecarving of an unknown Norse Goddess. She usually appears with serpents in each hand, possibly linking her to the ancient Babylonian Goddess Ishtar, or to the Cretan Bee Goddess. She

Waiting.... She will be ready technically for delivery by this date next month. At the moment she is 34 weeks. meaning it's the earliest she could be born and still be considered full term. This is obviously a picture of a little boy, not