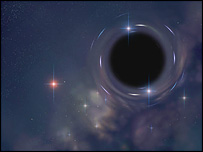 Lab fireball 'may be black hole'
Artists representation of a black hole, BBC
Creating the conditions for the formation of black holes is one of the aims of particle physics
A fireball created in a US particle accelerator has the characteristics of a black hole, a physicist has said.

It was generated at the Relativistic Heavy Ion Collider (RHIC) in New York, US, which smashes beams of gold nuclei together at near light speeds.

Horatiu Nastase says his calculations show that the core of the fireball has a striking similarity to a black hole.

His work has been published on the pre-print website arxiv.org and is reported in New Scientist magazine.

When the gold nuclei smash into each other they are broken down into particles called quarks and gluons.

These form a ball of plasma about 300 times hotter than the surface of the Sun. This fireball, which lasts just 10 million, billion, billionths of a second, can be detected because it absorbs jets of particles produced by the beam collisions.

But Nastase, of Brown University in Providence, Rhode Island, says there is something unusual about it.

Ten times as many jets were being absorbed by the fireball as were predicted by calculations.

The Brown researcher thinks the particles are disappearing into the fireball's core and reappearing as thermal radiation, just as matter is thought to fall into a black hole and come out as "Hawking" radiation.

However, even if the ball of plasma is a black hole, it is not thought to pose a threat. At these energies and distances, gravity is not the dominant force in a black hole.

Based on the events that I just posted below from the BBC, I feel it safe to say that my reoccuring dream that I have had ever since I can remember ....is going to come to pass. The sky will change...darkness will befall