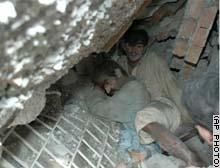 ISLAMABAD, Pakistan (CNN) -- Searchers worked into the night Monday to find more survivors of Pakistan's worst earthquake, as some people expressed anger over the pace of relief efforts.

The death toll has topped 30,000 in Pakistan alone, with another 999 dead in India and 1 reported death in Afghanistan.

Rescuers were still finding survivors in the wreckage of an 11-story apartment building in an upscale district of Islamabad late Monday.

Pakistani troops and a British search team pulled a 2-year-old girl from the rubble alive Monday night, followed by her mother. Both were taken to hospitals for evaluation after spending two days buried in the collapse, authorities on the scene told CNN.

Another adult was found alive earlier Monday in the building as the slow, methodical search went on, bringing the number of survivors rescued there to 25. Rescue workers erupted into cheers when they were able to bring out survivors.

But search teams also found 35 bodies in the rubble.

Andrew MacLeod, a U.N. disaster relief official in northern Pakistan, said another 11 people were rescued from collapsed schools in the hard-hit region.

Aid groups and the international community have responded to calls for assistance, but with much of the quake zone virtually inaccessible and bad weather impeding travel, help was slow reaching the most-affected areas.

Many survivors have been wading through mountains of rubble in search of buried people, food and clean water.

"We have just opened up the roads with the day and night efforts of the army," Pakistani presidential spokesman Maj. Gen. Shaukat Sultan told CNN.

"We are now trying to reach those areas that we haven't been able to reach so far."

With as many as 5 million people left homeless -- and living in the open and facing freezing temperatures -- Sultan said rescue and recovery teams and aid from many countries were on their way "to the most-affected areas."

Government, police and hospital officials estimated Pakistan's death toll at 30,000 but said that number was sure to rise.

Faiza Janmohammad, country director of Mercy Corps, said Pakistan's death toll was about 40,000, but the source of her information was not clear.

"This could get very close to tsunami levels," he said. "It's horrific. It really is terrible."

Pakistani Prime Minister Shaukat Aziz told CNN's "Late Edition" on Sunday that another 43,000 people were injured. Regarding the casualty figures, he said, "They will certainly go up."

The epicenter of the quake was in Muzaffarabad, the capital of Pakistan-administered Kashmir, which sits in the Himalayan foothills 60 miles (96 kilometers) northeast of Islamabad. (Full story)

The Pakistani army hospital in Muzaffarabad was heavily damaged, and mass burials were held Monday.

There also are reports of looting in Muzaffarabad.

"They've lost everything. They have no clothes, no food, nothing," resident Asim Butt told Reuters. "People have started looting things from shops."

Also badly hit was Pakistan's North-West Frontier province, where many villages were leveled and roads destroyed, making travel all but impossible.

CNN's Matthew Chance, reporting Monday from the city of Balakot in the North-West Frontier province, described a "scene of utter devastation," saying nearly every building in the tourist town of 250,000 had been destroyed.

People picked through the rubble with pick axes and their bare hands, looking for family and friends, Chance said, adding there were only four doctors to serve the thousands of injured.

Relief and rescue workers have yet to reach 30 percent to 40 percent of the affected areas, a military spokesman, Brig. Shah Jahan, said Sunday.

The United Nations has warned that more than 2.5 million people are in need of shelter following the earthquake, The Associated Press reported.
'Bear with us'

Across wide areas there is no power, or adequate food or water. Pakistanis have camped out in the streets overnight, fearful of returning home because of aftershocks, one of which measured 6.2 in magnitude.

Some slept in their cars, while others gathered in outdoor areas such as soccer fields.

Some survivors have been critical of the government's relief operation. They say thousands still need help, and with only a trickle of aid, angry Kashmiris were blocking roads and demanding relief.

"For heaven's sake bear with us. There are certain limitations. We are trying our best,'' he said.

Government officials are focusing on getting help to dig survivors from the rubble, take them to hospitals and begin repairing the region's shattered infrastructure.

Aziz, the Pakistani prime minister, has appealed to the international community to send heavy-lift helicopters as well as tents, blankets, medicine and "hundreds of millions of dollars."
Nations come forward

Planes packed with supplies are arriving, while rescue teams are being dispatched to help those who have been left injured, homeless or stranded.

Late Sunday, the White House announced the United States would provide initial aid of up to $50 million for reconstruction and relief efforts in Pakistan, a key U.S. ally in the war on terrorism. (Full story)

Ryan Crocker, the U.S. ambassador to Pakistan, said Monday that "assistance is flowing in now."

"Our first flight came in [Sunday] night -- the military airlift with blankets, water, rations," he said. "There will be additional flights tonight and on through the week."

Crocker also said that eight military helicopters had been brought to Pakistan from U.S. operations in Afghanistan.

British Prime Minister Tony Blair said ties to Pakistan "are made even closer by the large population of British citizens who trace their origin to the Kashmir region. Such ties make the growing number of casualties even harder to bear."

The United Nations has been coordinating relief efforts from the international airport in Islamabad, said Jan Egeland, U.N. undersecretary for humanitarian affairs.

But the need is staggering, Egeland said, with the number of homeless rivaling those left without shelter after last year's tsunami in South Asia.

"There will be need for hundreds of thousands of tents and emergency shelter for all the people who have lost everything," he said.
Military tensions aside

Political tensions between India and Pakistan over the Kashmir region appeared to take a back seat as Indian Prime Minister Manmohan Singh called Musharraf and offered help.

The two nations have fought three wars -- two of them over Kashmir -- since independence from British rule in 1947.

Musharraf said he thanked the Indian leader for the offer. "Whatever we need, we will certainly ask," he said, though he noted that there is "a little bit of sensitivity there."

Reuters contributed to this report.

Love the animals, love the plants, love everything. If you love everything, you will perceive the divine mystery in things. Once you perceive it, you will begin to comprehend it better every day. And you will come at last to love the whole world

Hundreds of people were killed in South and Central Asia and many more injured when a magnitude 7.6 earthquake -- estimated to be the most intense in the region in the last century -- jolted cities in three countries early today. Officials in