The water crystals from Fujiwara Dam, after receiving prayers from Reverend Kato Hoki, the chief priest of Jyuhouin Temple, Omiya City. Dr Emoto claims that crystals of ice, when exposed to prayer, express beautiful hexagonal and some extraordinary hepagonal forms.

Though we are celebrating the Songkran water festival, how much do we know about water?

As in many ancient civilisations, water has served as an integral part of Thai culture and is part of almost all rituals and festivities, from births and weddings, to commencing business and performing funeral rites. 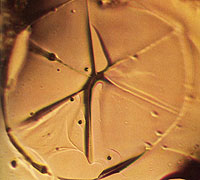 To his surprise, Dr Emoto found that before this frozen, crystallised water sample returned to its liquid form, it created a shape identical to the Chinese character for water.

It is believed that water in those rituals will bring blessings to us for prosperity and good health, or to carry our merit to the spirits in the world beyond.

Many, however, believe this to be merely tradition and superstition.

But Japanese researcher and alternative medicine advocate Dr Masaru Emoto says that perhaps our ancestors knew about the power of water far better than modern day people do.

Based on extensive experiments with water, Dr Emoto claims to have discovered that water more than a billion years old, and a basic component of many lifeforms on this planet has consciousness and can perceive, remember, and communicate with its environment like any other living organism.

Dr Masaru Emoto hopes his research and photographic documentation will lead to a new consciousness regarding Earth's most precious resource.

"We know very little about water.
Unless we become aware of its significance and learn the wrongs we have done in regard to water we won't be able to live in healthy harmony with it,"
said Dr Emoto, who recently visited Chulalongkorn University to give a talk on his findings, which served as the basis for his book, entitled Messages from Water.

He said it was utterly important to learn about water. We are living on a water planet; two-thirds of its surface area is covered by water. Most importantly, our body is made up of over 70 percent water. In short, "we are basically water," he said.

As an alternative medical doctor who incorporates water into his practice, Dr Emoto believes that water has healing power, and he committed himself to unravelling the mysteries of that power. In 1994, he began research using Magnetic Resonance Analyser (MRA) technology to measure the properties of water. MRA has been used worldwide in alternative medicine to measure the ability of the human body to resonate, or vibrate, at certain frequencies, as well as to test natural healing substances. 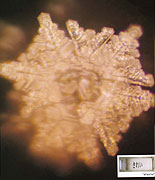 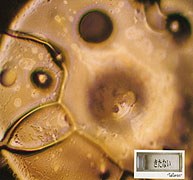 Letters and words have an influence on water crystals, says Dr Emoto.
This may be considered un-scientific to many as it takes a completely different turn from conventional scientific instruments. However, the doctor believes that to uncover the consciousness of water, a paradigm shift of thought and approach was required.

Together with his team and a wide pool of volunteers, Dr Emoto collected numerous water samples from many parts of Japan and around the world. His daily observations of water were done in a freezer room. To capture the secrets of water on film, he had to take a photograph at the moment when the frozen ice crystals started to liquefy.

He placed each sample of water on a series of 100 petri dishes, putting them in a freezer at minus 5C for two hours. When ready for photographing, he would take out th samples, then frozen into crystals, and put them under a microscope to be photographed at magnifications of 200 to 500 times. When the temperature rose to about 0C, a split moment before the frozen flakes became liquid, they would show certain crystal structures. 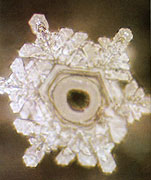 Unlike tap water samples from Tokyo, water from Katano City, Osaka, creates clearer and more beautiful crystals. About 60 percent of tap water there comes from an underground water source. Dr Emoto relates the quality of the crystals to the fact that Sen-no-Rikyu, a tea master and a founder of the Sen School for tea ceremonies, used water from Katano to make tea. 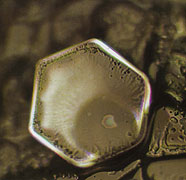 This picture shows crystals of rain that fell on Asakusa-bashi in the centre of Tokyo. It was hard to find any shapely crystals in this water sample. This was especially evident when compared to crystals found in tap water. 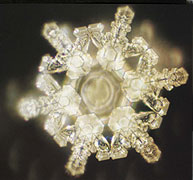 To Dr Emoto, this crystal gives the impression of people holding hands. The water sample is from Sanbu-ichi Yusui Spring Water, in Yamanashi Prefecture, where water comes from snow up on the Yatsugatake Mountain.
"It is impossible to obtain identical crystal pictures even from one type of water ... but there is a certain tendency in all of the samples to form a crystal grid," he wrote in his book.

Over a period of four and a half years, his team made about 10,000 pictures of water crystals.

After observing the crystallisation process a few thousand times, Dr Emoto said each crystal seemed to be trying hard to become beautiful. "It's trying to purify itself," he wrote.

"Healthy water will show a complete hexagonal crystal structure while the chipping away and/or collapsing of crystal structures are not good signs," he explained. It may indicate some impediments are obstructing the process.

Dr Emoto explained that water contains Hado, an intrinsic vibrational pattern at the atomic level in all matter, the smallest unit of energy. Its basis is the energy of human consciousness. And the vibration of water can be observed in the form of crystal structures.

"Water is the most receptive of the four elements. It responds," he said.

To prove this, Dr Emoto played music for water samples. One by one, he put a bottle of distilled water between two amplifiers and played different kinds of music. Water, hearing music by Bach, Mozart and Beethoven, seemed to boast clear and beautiful crystal structures, whereas water hearing pop and heavy metal music was not able to produce well-structured crystals, he claimed.

Further, Dr Emoto tested what effect the chanting of monks would have on water. The result? All water samples that were offered prayers showed clear and spectacular crystal structures.

"Water is capable of memorising sound vibrations, which results in crystallisation," he said. "Musical vibrations contain positive and negative energies, depending on the information inscribed into them. Water reflects what it perceives," he said. 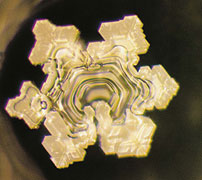 This picture shows a water sample after its exposure to Mozart's `Symphony No. 40 in G Minor'. This beautiful and graceful crystal, as Dr Emoto put it, seems to express the composer's feelings. 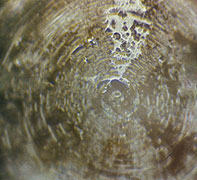 When exposed to heavy metal music, water, coming from the same source as the one exposed to Mozart's music, cannot form a hexagonal crystal structure. Rather it breaks down into pieces. Dr Emoto reasoned that water may react negatively to music that is filled with angry lyrics. 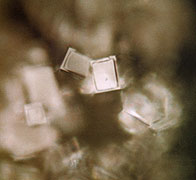 Hit music does not always contribute to the production of well-formed crystals. This picture shows a crystal, exposed to a hit Japanese pop music song.
Dr Emoto also tried to show that water can perceive energy from pictures and words. "Letters and pictures contain vibrations, too. Our consciousness, values and feelings are imprinted on such objects."

To us, the word "devil" carries a negative meaning. When Dr Emoto attached a piece of paper with the word "devil' on it to a bottle of water, he claimed that after 24 hours the result was a deformed, blackish structure, with no crystallisation at all. On the contrary, when he used the word "angel" in the same type of experiment, beautiful hexagonal crystals formed.

Electrical appliances can affect water too, according to experiments done by Dr Emoto. Though he placed a glass of water in front of a running computer monitor for four hours, no crystals were produced. However, when he attached a piece of paper to a sample bearing a positive word like "love", crystals developed. Dr Emoto also placed a bottle of water near a television playing a movie with a positive storyline. The water formed beautiful crystals.

"Water absorbs and is influenced by its surroundings. The medium is not as important as the energy it conveys. If you have a happy and positive conversation on a mobile phone, the water will form good crystals too.

He suggested that we take care of the water that is within ourselves. "As we are mainly composed of water, we should vibrate good energy to the water in our bodies."

Positive thinking and emotions, for example, can readily affect the quality of water in our body, hence affecting the condition of our health. Stress, a cause of many illnesses, is a result of the bad energy we carry in our body's water.

He added that we should also be kind to other water-based beings, which, in fact, includes all living things on Earth. He said we could create positive energy flows between ourselves and other creatures.

Sadly, water around the world today has become highly polluted and contaminated as a result of our un-gratefulness and ignorance. However, Dr Emoto argued that we have the power to improve the quality of contaminated water by becoming more grateful for it.

A picture of the crystal structure of the rainwater in Tokorozawa city, taken in June 1998, showed no crystallisation. But once the citizens became aware of their city's environmental problems, pictures of water samples taken in February 1999 began to show beautiful crystal shapes.

"By changing the vibration, we can change the substance. So we can alter the environment," he said.

To many scientists, Dr Emoto's findings may be less than scientific. However, Dr Emoto hopes they will raise awareness among people of the importance of water, and change their outlook and treatment of it _ the origin and essence of our being.

The book 'Messages from Water' (known in Thai as 'Sarn Jak Waree') was published by Suan Ngern Meema. Priced at 360 baht, it is available at major bookstores. To learn more about Dr Emoto's work and pictures of crystals, see www.hado.net.

Tuesday April the 12th. I have slept until 4:00pm Upon Waking I immediately tell my husband my dream. DREAM: In Spirit with E.C. In Spirit meaning I did not have my view point as first person. Only the floating/perching view of