Today was an awesome day until Guinness created what would be a domino effect of chaos.

See, today was great when I woke this morning I was greated by Matthew with my yummie daily cup of coffee that he makes for me. Mmmmmmm... Then when I went to the rest room, the blood seemed less, which is good news. It was nice outside, the sun was shinning, the birds were chirping. I opened all the windows to let the good smelling air to breeze through, then I watered all of my plants and did the dishes.
Soon after Autumn wakes and upon seeing the windows and doors open she immediately wants to go outside. As I'm getting clothing for her she jumps in on Willow and yells,"wake up wake up Wiwwow, I want to flay outside!" This takes a few tries but then Willow does finally wake. I get both the girls dressed, brush their hair, we grab some pizza and sippy cups then head outside Weeeeeeeeee. 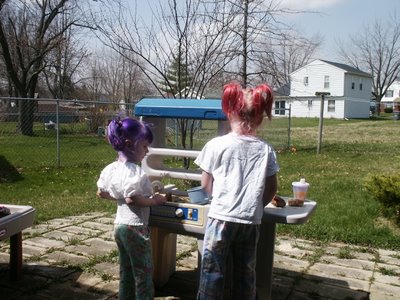 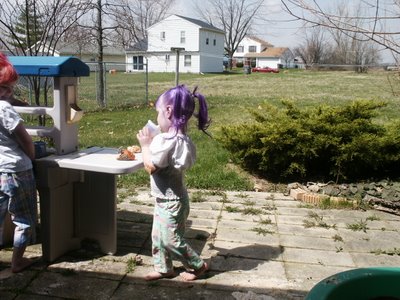 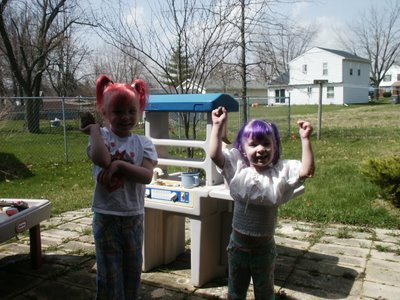 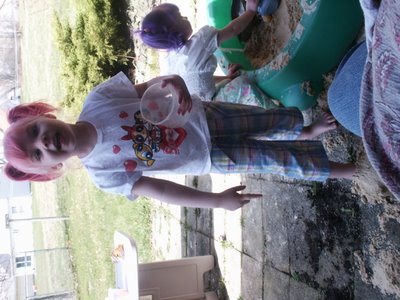 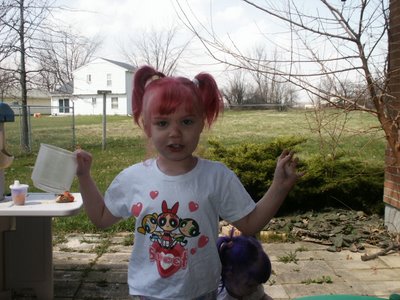 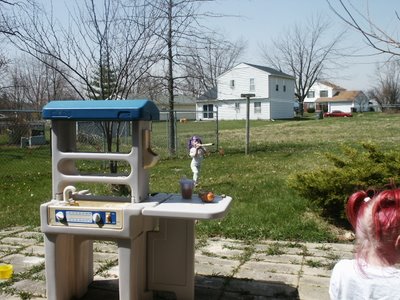 All is fun and great until the four wheeler from down the street comes barreling down the road ad into the feild. :( Sorry but that spells major danger to me and I don't want the girls anywhere near the feild. Which makes me sad because I played through that entire feild when I was growing up. In the house we head.

As I'm breastfeeding Elish in the kitchen I see a chocolate lab with his owners walking this way down the street. All I can think is SHIIIIIIIIT! You see we have a broken screen door. The next thing I know, Guinness is rushing the door. I yell "Noooooooooooooooooooo GUINNESS!!!!!!!!" scoop Elish onto my shoulder.

While on the way out the door I yell over my shoulder to the girls to "STAY INSIDE!"

But I was hoping they would listen.

Zooooom out the door they run chasing Guinness through the neighborhood where my eyes can't see them. All I can do is yell at the top of my lungs threats about telling their dad and how they are only 2 and 5 years old and they can't just run off like that because anything could happen to them, etc. All of that is so loud I know the entire neighborhood heard my mouth. Well, Autumn comes running back yelling, " noooo don't call daddy, nooo." She stays by my side as I continue to yell for Willow to come home. I'm worried that she might follow Guinness right into a road where I can't see her and that'll be it. So Iam seriously panicky for her to get into my line of vision.

Next thing I know I trip over her Willow TREE and come crashing down with Elish. During the fall time seemed to slooooooow way down as I was thinking 'oh shit my babies head my babies head!' But just as it seemed like we were both going to hit the pavement thanks to my cerebral palsy, my hip turned to the side and took the fall. Elish's head was only centimeters away from hitting the pavement. My heart rate was so high. Autumn immediately came to our sides asking if we were ok. I explained that we were and thank god that I took the fall. Then I tried to explain to her about my legs and how they don't work like everyone elses and that's why we really can't be playing outside until we get a fence up. I explain that she can't go running out of the house if I tell her to stay inside.

FINALLY Willow comes back and I just start yelling in a shooken up voice about why she can't run away out the door and how in my worry for her I tripped with Elish in my arms. Explaining that my legs are bad etc.

The difference between Autumn and Willow, Willow never asked if Elish and I were ok, Instead she seemed out in her own world unaffected by it all. Autumn on the other hand was so very worried to her core. In two to six days though, I gaurentee that Willow will bring up the fall with true concern in her heart and she will apologize for running off.

In the meantime I'm on my butt, though I can't get up because I am surrounded by pavement. I'm not going to lay Elish down on pavement because my legs don't work, I need to use my arms to get up. It's the Cerebral Palsy. So I have to explain to Willow several times that I want her to go inside the house and get Elish's bouncy chair so I can lay her in it so I can get up. Amazingly Willow gets the bouncy chair without coming back out to ask me to repeat it all because she forgot. As this is what it's like daily with litte Willow Bean, the forgetting and the repeating, we believe she may be ADD. Hence home schooling.

I'm assuming that my neighbors who have known me since I was a little girl didn't see the fall because I'd like to think they would have been flying out their door in a flash to make sure we were ok. My other neighbors don't know me as the neighboorhood has changed in the past 15 years. HOWEVER, the nosey neighbor whose house I was facing when I fell and whose windows and doors were open didn't budge either, I don't know how she couldn't hear Elish's loud scream/shreik. Poor Elish was terrified. And there you have it, that's how my great day turned chaos.

Matty took the photo but don't wory we have an Easter Picture of Daddy and Elish over at Elish's blog.